Delivered to your inbox upon request

Heaven is my throne, and earth is my footstool: what house will ye build me? saith the Lord: or what is the place of my rest? 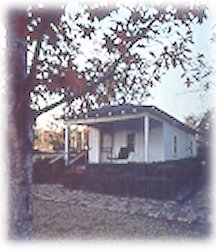 This weekend I, and some others traveled to Memphis for a Christian concert.  As we traveled, the subject of Elvis came up. In Memphis, there are constant reminders that Elvis did indeed once live there. Signs are everywhere pointing the way to Graceland, the mansion Elvis once called home.  One of my fellow travelers commented that Elvis sure didn't go far from his roots, far from his home in Tupelo, MS, when he settled in Memphis, TN.

As we traveled on Elvis was forgotten and the conversation turned to musicians who are still living today, who we were going to see. We finally reached our destination in the heart of Memphis, saw who we had journeyed to see, and headed back home about eleven.

As we were about to leave Memphis, the conversation turned to Elvis once more. On a huge billboard, on the outskirts of the city, we read these words, "Tupelo, Birthplace of Elvis Presley,  the place to go."  I think everyone in the car said, or at least thought,  "Amen and hallelujah" at the same time. It had been a long evening and going home to Tupelo sounded pretty good.

As I looked at a picture on the billboard of the small shotgun house in Tupelo where Elvis had once lived,  a house which I have  passed by a thousand or so times in my lifetime;  I wondered if the person who built the house ever dreamed this picture would be shining brightly, displayed high up on a  billboard in Memphis TN.

I shared part of this thought with my son and his friend. I said, "Just think about whoever built that small house, they never knew. You never know where something you build or create will end up long after you are dead and gone."  By their reaction, which wasn't much of anything, I knew they didn't get my line of thinking at the moment, so I just continued to think about the house instead of speaking about it.

I thought the house itself was nothing really.  The only reason the little house became famous was because of the person who once lived in it.  He wasn't famous when he lived in the now infamous house. He wasn't yet Elvis Presley. He was just Elvis, a poor kid living in East Tupelo, just like I once was.  Of course, you all know the story.  He moved to Memphis to become the king of rock n roll and still has thousands of fans coming to see the little house in Tupelo, as well as Graceland, the huge mansion in Memphis.

I know the house I once lived in will never be on a billboard in Memphis.  I know of no one who wants to see the house.  It is still standing over in East Tupelo, not to far from Elvis's little house, but I am sure, I am the only one who passes by and thinks, "Birthplace of Judy Parker."

The houses that were built by someone where each of us lived at one time or another, most likely aren't going to turn out to be significant landmarks.  The significance of  Elvis's house, or any house for that matter,  comes from who dwells within it.

So it is with each of us.  Our significance is really nothing if we just look at the dwelling place that we each are.  Our significance, while we are here, comes from the One who dwells within us, within these houses of flesh.  His name is Jesus.  He is The King of everything.

Sometimes when we look at ourselves, we don't seem too significant.  Who will be coming on long journeys to see where we once lived?   Elvis probably never imagined all this would be taking place forty years after he had left here.  Most of us wouldn't think we have built or created much to be remembered for after we are gone.  I wonder if Elvis ever thought all the music and movies he created would still be around today.  Did the man who built the little house ever imagine all this?  I am almost certain he didn't. The significance of the house only came because of the "king" who dwelled within it.

Today we need to each realize the significance of who we are comes from the King who dwells within us.  We need to realize what we create through the One dwelling within us can live on and on long after we have left here.  We each have the power within us to build and create positive things through Jesus Christ.  We don't have to journey a long way from our roots to leave a lasting impact on this world.

Someday when we make it home, someone will come up to us and say, "Remember when you were on earth, what you said, did, sang, wrote, or prayed, remember that small thing you created? It pointed me to Jesus who saved me,  and that is the reason I am here with you today."   You might have never dreamed that person you reached out to, that you helped build up,  would one day be shining brightly up in heaven.